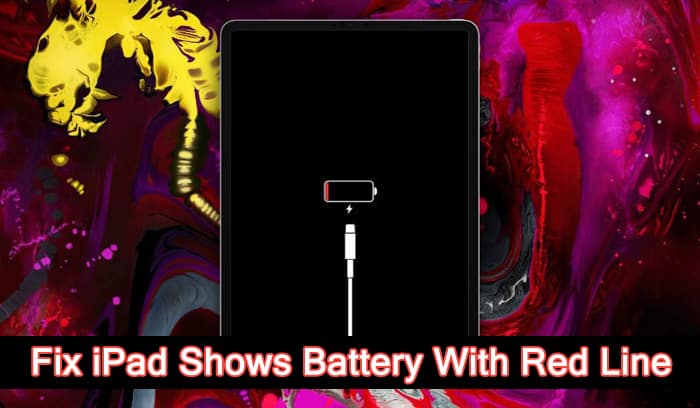 What Does Battery With Red Line Mean On iPad?

When your iPad shows a battery with a red line then it means that your iDevice doesn’t have sufficient charge so that it can reboot. In this situation, you need to charge your iPad with a real Apple charger or you can also charge it through your computer using a USB cable. When your phone will get charged then it will be able to reboot.

When you view the red line 3 times on the battery flash before turning off, this indicates that your iPad is not getting enough power to charge. It may happen when you are not using the real Apple charger. In this case, you need to use the original Apple charger and plug it into the power source.

You can see the below practical scenarios which are reported by the real iPad users.

Practical Scenario 1: An iPad Air User Has Charged The iPad For Some Time But The Red Battery Screen Doesn’t Disappear

So, my iPad’s been showing the red battery screen for some time now, even after charging for quite some time. I’ve tried doing a force restart and that hasn’t done anything either. The only hope I had is when it flashed the apple logo, and then went back to the red battery screen. What would you recommend I do in this situation?

Practical Scenario 2: An iPad Pro User’s Charger Has Not Any Fault But It Doesn’t Charge And Shows Little Red Battery Line

My iPad pro when plugged in does not charge, turn on or do anything except occasionally flash the battery on the screen w a tiny little red line and that is it. It is not the charger, as I’ve used the charger on other devices. Has anyone else had a problem like this? And if so, how did you solve it??

Before you go to the repair shop to fix it, you should try some troubleshooting solutions to fix iPad shows battery with red line.

Additional Reading: Why My iPad Is Not Charging? Here Is The Fix!

Solution 1: Try To Charge Your iPad

When your iPad shows a red battery line then you should follow the below steps to charge your iPad to fix the issue.

Note: Ensure that you are using an original Apple charger or an Apple-certified charger.

Step 1: Insert the charger on your iPad.

Step 2: Now, plug it into the power source, a USB 2.0 or 3.0 on your computer (make sure it is not in sleep mode) or you can use a docking station or powered USB hub.

Step 3: Charge it for at least 1 hour and then check on it again. 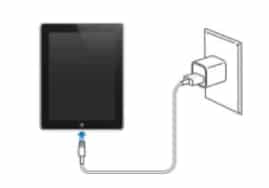 You can also try to force restart your iPad this will help to force close all the apps which are creating the problem of iPad flashing red battery.

Here, follow the steps to force restart your iPad to fix iPad battery shows red but is fully charged.

For iPad With Home Button: Press and hold both Top and Home buttons simultaneously. Hold both buttons until you see the Apple logo on the screen. After that, leave both buttons.

For All Other iPad Models: Press and quickly release Volume Up button. Repeat the same process with Volume Down button. Then, press and hold the top button. When you see the Apple logo on the screen then leave the button. 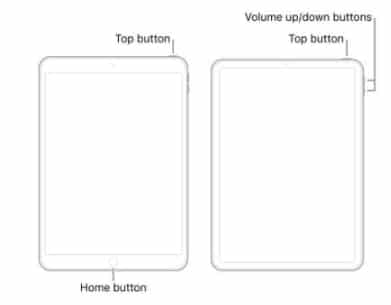 You can also restore your iPad using iTunes in recovery mode to fix iPad shows battery with red line when fully charged. Remember that this will delete saved data from your iPad. So, if you have a backup of those data then later on you can restore them.

Now, follow the below steps to restore your iPad in recovery mode using iTunes to fix iPad red battery with no lightning bolt.

Step 1: Run the latest version of iTunes on your computer and then connect your iPad to it using a USB cable.

Step 3: Next, you need to slide to switch off the device and then hold the Power button. When the iPad recovery screen appears then you need to release the buttons. 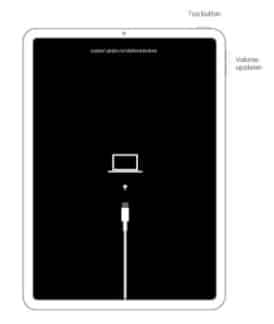 Note: If your iPad takes long time to complete the process (more than 15 minutes) then you should repeat the above steps but in the last step you need to select “restore” from the iPad recovery menu.

If there is any fault in your iPad iOS then it can also cause iPad red battery of death. So, to fix this issue you can try iOS System Repair software which is a suitable iPad System Repair tool.

You can also use this iOS Repair tool to fix other iOS system issues like black or white screen of death, stuck in recovery mode, iTunes error, Apple logo, and many more.

If the above solutions didn’t help you to fix a stuck iPad red battery on a charging screen then lastly you should contact the Apple Support center as the issue can be occurring due to hardware damage.

So, these are the top effective 5 solutions that you can try to fix iPad shows battery with red line. If there is some problem with your iPad iOS then in this situation you a highly suggested to try iPad System Repair tool to fix this issue.